Liger Leadership Academy students are English Language Learners. They have been immersed in English for over two years but are still developing grammar and fluency. At Liger, we pride ourselves on prioritizing process over product. Please excuse any English errors as part of the learning continuum our students have taken over the years. 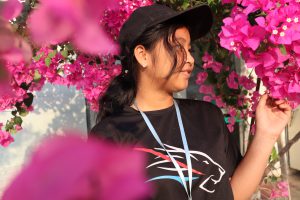 This is me a girl and that is one of the luckiest people in the world to get to learn in this school which is Liger Leadership Academy. My full name is Ponleur Rachana Chen, but people mostly called me Rachana and I had learned in Liger for three years already. My hometown is in Ratanakiri province. Besides school, music is a part of me. I like to do the things that I passionate about.

My thought ever since before and now is still the same which is I want to change my country to be a developing country. Changing is not easy, but if we take it slowly and step by step even we make the small changes, but it is the positive change and that what lead to big changes just like the Khmer quote that state” តក់ៗពេញបំពង់ ” which mean slowly one drop by one drop it will fill in and this is preferred to the palm juice which they have to wait a night to get it to fill in the bottle which is dropped by drop it will fill in so everything started from small to big slowly slowly, but step with power. Start with nothing, but you might end up to change the things you want it to be, so just get up and let’s do it!